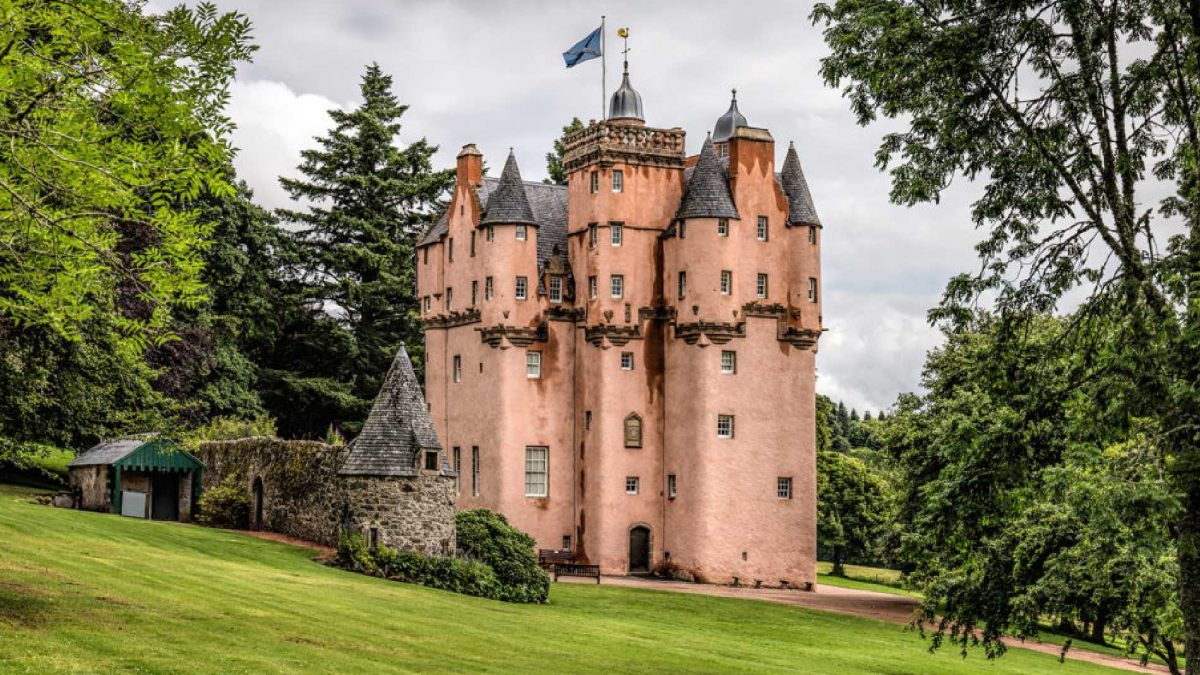 Craigievar Castle is one of the most popular castles near Aberdeen to visit. It’s around a 50 minute drive West (inland) from Aberdeen. It’s the best preserved 16th Century tower in Scotland and it’s pink spellbinding tower is said to be the inspiration behind Disney’s Cindarella castle.

Craigievar Castle was built by Sir William Forbes of Craigievar, a prominent member of a family of rich and influential landowners. The castle became famous for its magnificent contents, which were held there by the Forbes family until they were auctioned off in 1914.

A number of different architectural influences are displayed in Craigievar, including an early Gothic tower house with Classic Revival extensions , resulting in a somewhat disjointed appearance.

The castle is believed to be the work of John Smith, one of Scotland ‘s finest architects, although he could not have been the designer as he died in 1731 aged only 32.

Craigievar Castle was built about the same time as the much larger Fyvie Castle . During the 19th century Craigievar was in poor repair and Sir William Forbes employed Alexander Marshall Mackenzie to restore it between 1877 and 1880.

The castle was one of many locations used for filming episodes of Monty Python’s Flying Circus, most notably ” The Architect Sketch “, ” Sherlock Holmes and the Case of the Two-Headed Dog ” and ” The Fish-Slapping Dance “.

The castle was also used as a location in a number of other movies including Highlander, Monarch of the Glen, A Shot at Glory  and Disney’s Brave.

Craigievar Castle is now open to the public as a museum  and is a popular visitor attraction. It is now in the care of Historic Environment Scotland.

The castle was named as one of the 50  most inconic places to stay by The Times newspaper’s travel section  in 2016.

In 2010, Craigievar received 5-star “Gold” status from VisitScotland, with the Forbes family crest embedded in the road outside.