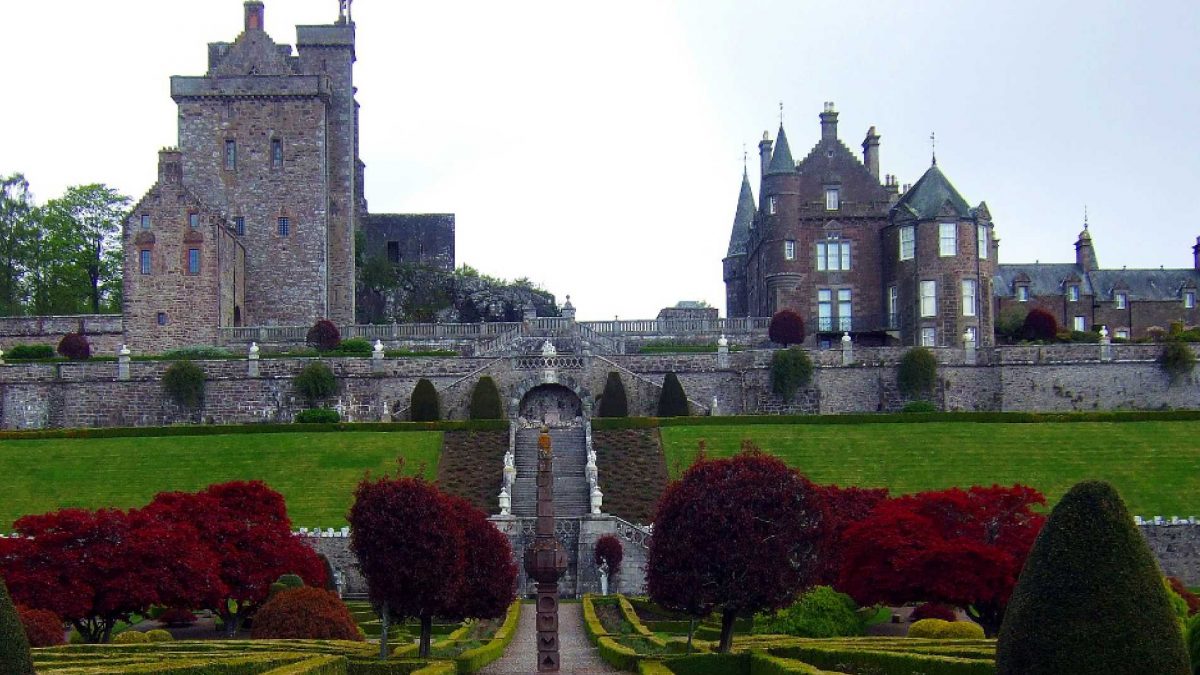 The Drummond Castle Gardens was created in the early 1900s and is situated within 10 acres of land on the banks of the River Clyde in North Lanarkshire. The castle, which is now home to Scotland’s National Galleries of Fine Arts, is set in a romantic 15th century garden designed by Sir William Bruce.

The castle is open for public viewing and is a regular setting for weddings and highland games events.

Drummond Castle has been the ancestral home of the Clan Drummond for over 600 years. The name derives from Druim which means ridge or hill and Monadh, which means plain or field. The original Drummond Castle was built in the early 13th century by King David I as a royal hunting lodge to provide food for his court while he was staying in Strathclyde.

The castle changed hands twice during Scottish history before it fell into disrepair by 1681 and was demolished due to its owners crimes against the king at that time, King William III of Scotland. The site was turned into a farming estate by the Earl of Perth.

The new castle was built in 1897 and designed by architect James Miller, who also designed major buildings such as the Scottish National Gallery, Edinburgh, and The Albert Halls in Glasgow. The castle was built for the banker and politician Sir William Baird (1847-1927) in a Ruskinian Gothic style.

In 1922 it became home to Sir William’s son Charles Baird until his death in 1966.
In 1968, Drummond Castle opened its doors as an art gallery and museum; this year also saw the addition of a library containing books about art, architecture, libraries and decorative arts.

The gardens are also home to an award-winning tree house designed by Architect Andy MacMillan. Visitors can take a walk down the long series of terraces that lead them into and out of wet woodland at either end of the garden. The design of the gardens is a feast to the eyes and a wonderful place to relax in before going on to view the exhibits within the castle.

The gardens are open to visitors all-year around, all-day every day from 9am until dusk. Admission is free. Visitors can park in public car parks or park their cars in official parking spaces provided at ‘The Drum’ outdoor arena at Clyde Place next to the gardens, where they can catch a free shuttle bus service that will take them up into the Castle grounds.

Free guided tours are available at 11:30am and 3:30pm every day. The terraces are punctuated with a series of spectacular waterfalls and formal gardens, including a knot garden and a tiered parterre. The tiered parterre is planted with hundreds of seasonal plants, including hardy geraniums, lavender and tulips. In the summer months the tiered parterre comes to life with colour from large displays of dahlias and other perennial summer flowers.

The gardens are also home to various sculptures such as an enormous gnome sculpture, strolling toy soldiers by Charles Jencks (son of one of Bruce’s team), a stag sculpture by Tom Murphy and two sculptures by Linda Stewart entitled ‘Hope’ and ‘Dream’.
The garden is also home to a series of “Cloud Beds”, designed by Tom Murphy, which are large boxes filled with compost and planted with a range of flowers. The boxes are enclosed by white gauze so that when the wind blows it appears as if you are standing inside a cloud. The Cloud Beds were first featured in New York’s Museum of Modern Art and have been exhibited at the Scottish and Luxembourg Gardens’ Festivals.

The garden design was created by Sir William Bruce between 1894 and 1903, with various alterations being carried out to the gardens in 1965 under the supervision of Muriel Bell.

Sir William Bruce is considered one of the most influential garden designers in Scotland. He was born in 1859 and attended the University of Edinburgh where he studied law. He began his professional life as an Advocate (Scotland’s equivalent to a Barrister) based in Glasgow, however he soon became interested in the design and creation of gardens. In 1886 Bruce published his book “Gardens Old and New” which was a bestseller at the time. This led him on to designing many of Scotland’s famous gardens, including the grounds at Scone Palace, Drummond Castle Gardens and Culzean Castle Garden. His landscape designs were considered revolutionary at the time with much use being made of rockeries and water features.